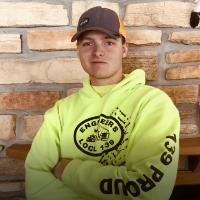 Zachary O. Karsten DOB 06-19-2000. Born and raised in rural Boscobel Wisconsin (pop. 3000). Attended Boscobel schools K-12 and graduated May 2018. Started my first job at Boscobel Bowl & Banquet at age 14. Started washing dishes and worked my way up to cooking then on to maintenance and remodeling. When I was old enough to drive I took on a second job manufacturing hunting blinds and raising a flock of over 1000 pheasants. I became interested in the trades at age 14 when I realized the opportunity for education and adventure. As a senior in high school I took four online classes through the IUOE Local 139 partnered with Fox Valley Tech and K-12. Once I turned 18, (June 19, 2018) I started an apprenticeship through the IUOE Local 139 and then signed on with JF Brennan working marine construction as an apprentice operator specializing in cranes. This employment opportunity has allowed me to work as far North as Lake Superior and far South as Louisana.

Attracting and Training Your Workforce: Operating Engineers’ Innovative Solutions
Wednesday, March 11 • 9:30 AM - 10:30 AM