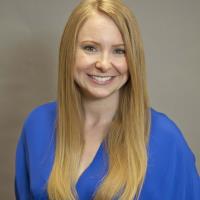 Nora Degnan started in 2004 as a project estimator/project manager at Thorne Associates, Inc., a large drywall, acoustic ceiling, plaster, and carpentry contractor in Chicago. Nora works and partners with her dad, uncle, cousin, and Dana Thorne in the family business that was started by the Thorne family with her dad and uncle in 1986. Nora became a vice president and part owner in 2018. She is still estimating and running projects while taking on new ownership roles such as updating and running the annual safety meeting, working with the safety team on tracking and promoting safer jobsites, and overseeing the accounting department. Nora is the co-chair of steering committee for the Chicagoland Associated General Contractors (CAGC) Construction Leadership Council (CLC) and a non-voting board member with CAGC. She is also a steering committee member for the Construction Leadership Council (CLC) Associated General Contractors (AGC) of America and is serving a one year stint on the AGC board of directors. Nora is the president of the Midwest Wall and Ceiling Contractors (MWCC), the drywall, acoustic ceiling, and plaster contractor organization in Chicago. She actively participates in promoting the industry locally and working on union/contractor issues. As the new secretary at the Mid-America Regional Bargaining Association (MARBA), she will become even more involved in negotiating and navigating the major labor agreements in Chicago. She is a proud NAWIC member and, as president from 2013-2015, she worked with her board to combine with another chapter going from just thirteen members to over thirty. The chapter revamps that Nora and her team put in place revitalized the chapter which has grown to over seventy members today. Since starting in her career, Nora has graduated with her MBA in Finance from Elmhurst College and, in 2020, will obtain a master’s degree from Northwestern University in Executive Management for Design and Construction (EMDC). She was born, raised, and now resides in Chicago with her husband, Tim Iberle.